Kamaka Dias hosts a new podcast talking stories with local Hawai’i figures such as business owners, leaders, athletes, and influencers about their lives, supporting local, and everything going on within Hawai’i’s universe. Join us as we take the filter off and shed a new light on our guests as we learn more about some of the most influential locals in our community.

Check out Hawaiiverse.com for Hawai’i’s largest online platform of local products and businesses. 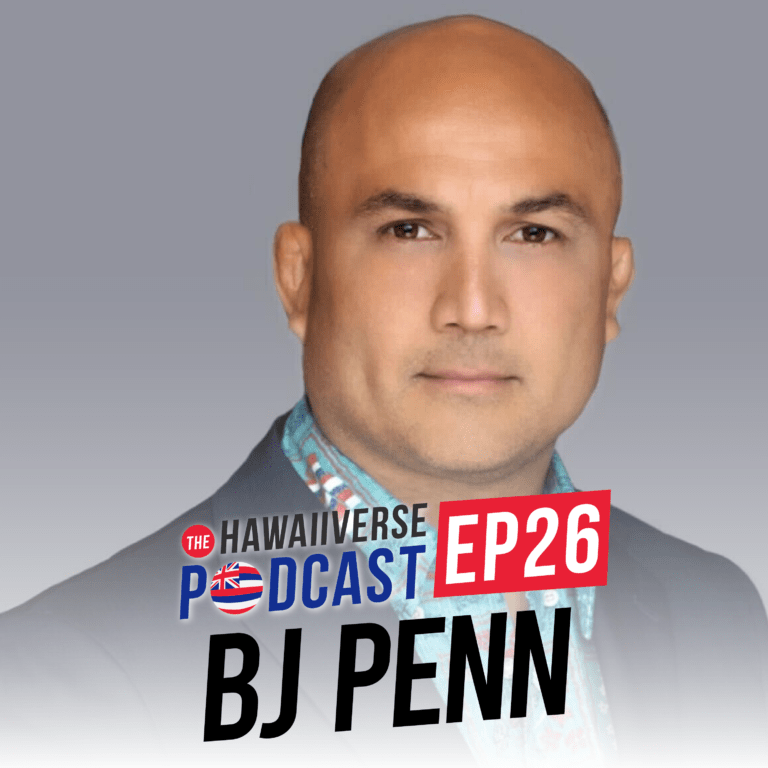 BJ Penn is a Native-Hawaiian MMA legend from the Big Island of Hawai’i. He is a father, businessman, author, and former UFC champion. He is one of only 7 UFC fighters to ever win titles in multiple weight classes and is the first non-Brazilian to win the jiu-jitsu world championship. Now, he is stepping into a new arena and running for governor or Hawai’i as a republican candidate. In this episode we talk about how he got into mixed martial arts, his motivation for running for governor, some of the issues locals face, what he plans to do if he is elected, and so much more. Enjoy! 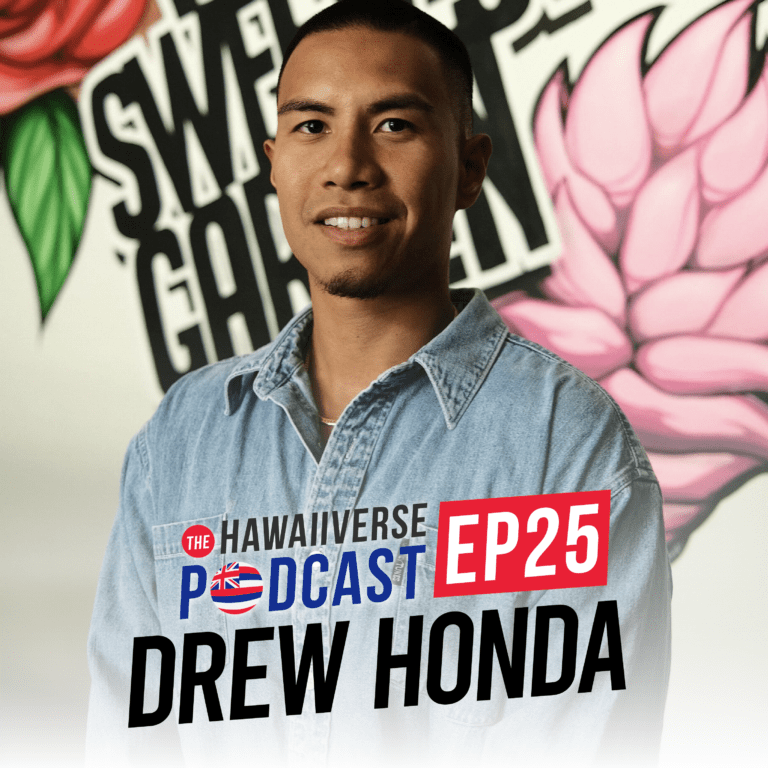 Drew Honda is a Kamehameha graduate from the island of O’ahu. He is the CEO and founder of Sweet Enemy Clothing. This entrepreneur is a hustler that is making a name for himself in the streetwear scene. Drew has collaborated with multiple brands, local athletes, and musicians and hopes to be the biggest brand in the world one day. He started his business as a tribute to his grandma, Rose, and is always reminding others to ‘never forget the reason.’ In this episode we talk about the start of Sweet Enemy Clothing, his passion for fashion, his hustle to build and grow his brand, the entrepreneurial struggles and successes, and so much more. Enjoy! 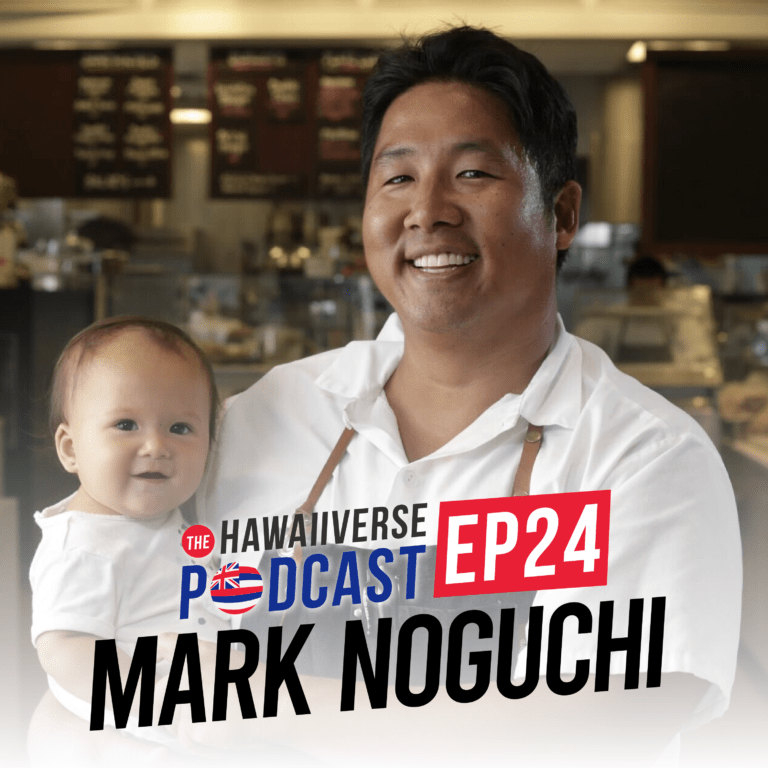 Mark “Gooch” Noguchi is a nationally recognized chef from the island of O’ahu. He has been featured on many news stations, TV shows, and even starred in his very own YouTube series presented by Toyota Hawai’i. Gooch is also an entrepreneur, teacher, hula dancer, husband and father to two daughters. This culturally aware kanaka ties in culture with everything he does and is an inspiration to me and many others. In this episode we talk about growing up in Mānoa and dropping out to of high school to become a DJ, moving to Hilo and joining a hula hālau, how he became a chef, Hawaiian food vs. Local food, being Hawaiian at heart, sustainability, and so much more. Enjoy the episode! 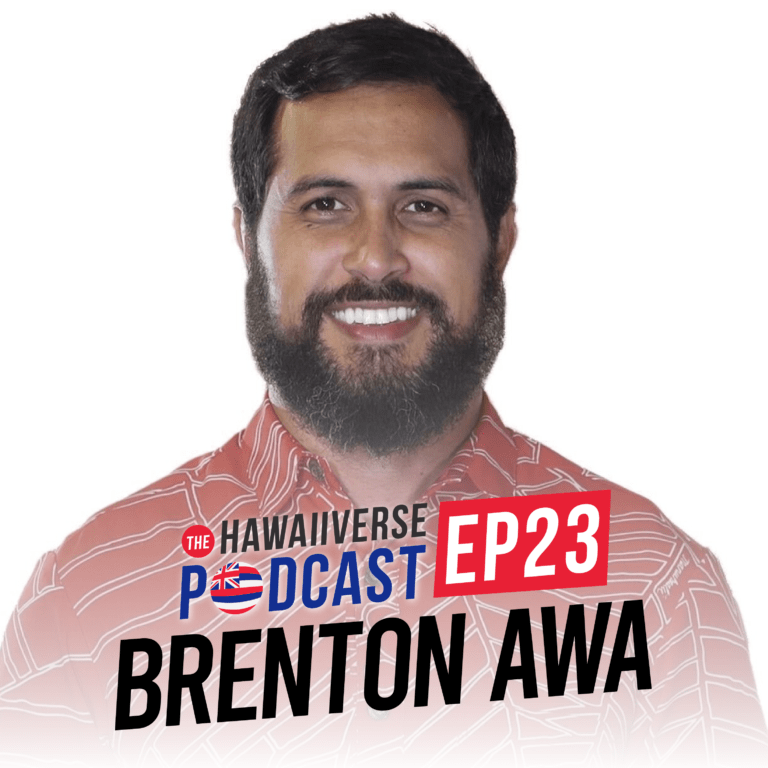 Brenton Awa is a Native-Hawaiian journalist from the island of O’ahu. He’s a father of three, a high school wrestling state champion, and a former news anchor for KITV4. Since leaving the news station he has been taking a grassroots approach in the community and reporting local news all on his own, all while substitute teaching to make ends meet. Brenton has decided to run for state senate to represent district 23 and hopes to bring some real change to Hawai’i. In this episode we talk about growing up in the country and where he got his work ethic from, his journey into journalism, misinformation in the media, his plans for the state senate if he is elected, and so much more. Enjoy! 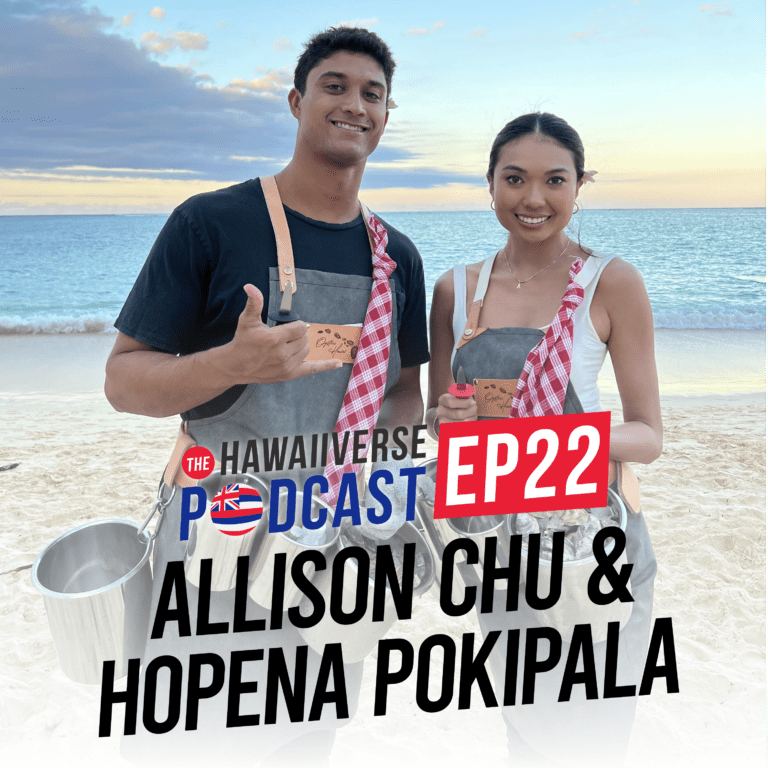 Allison Chu is a Hapa model, actress, singer, hula dancer and beauty queen. She was the valedictorian of her high school and became the only person to win both Miss Hawai’i and Miss Hawai’i USA. Hopena Pokipala is a Native-Hawaiian waterman who was born with paddling in his blood. He joined the canoe club at age seven and guided his team to 7 consecutive junior state championships. In 2018 he built his own outrigger canoe, which is takes out in front of his home in Kailua. Together Allie and Hopena founded Oysters Hawai’i, the only mobile oyster bar in the islands. In this episode we talk about how they met, Allie’s reign as Miss Hawai’i and Miss Hawai’i USA, growing up in Hawai’i and big wave surfing, their new business Oysters Hawai’i and so much more. Enjoy! 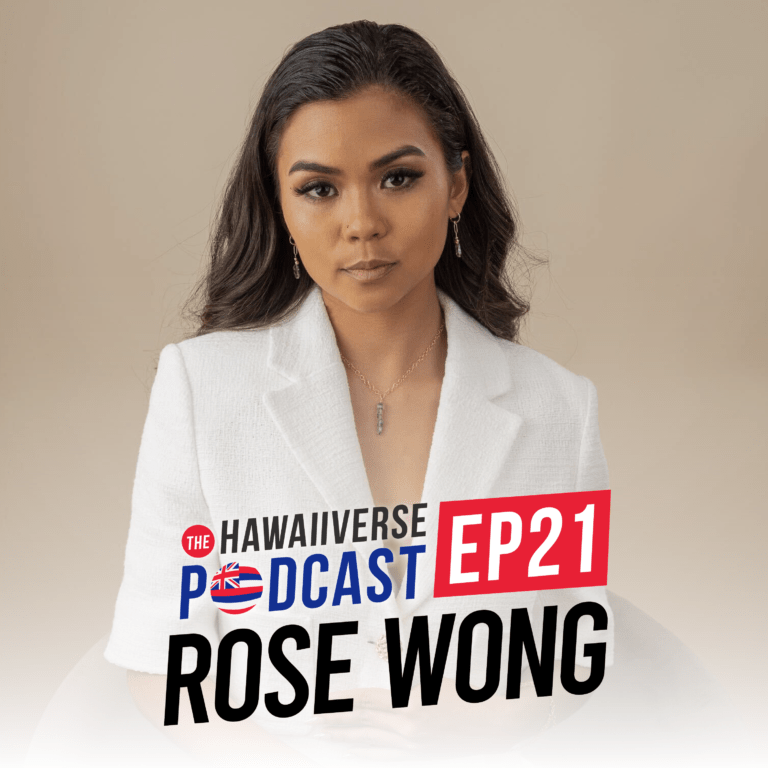 Rose Wong is a Filipino, Chinese award-winning entrepreneur from the island of O’ahu. She became the youngest store owner in Waikiki at the age of 21 opening up Kolohe, a handmade jewelry “experience-based” boutique. Among her many accomplishments such as being recognized as Student Entrepreneur of the year by the Pacific Asian Center of Entrepreneurship in 2018 and the Hawai’i Venture Capital Association in 2019, she is also a first generation college graduate. In this episode we talk about her childhood, growing up in a household of 15, working a million different jobs in high school, starting her own business, opening up her first store in Waikiki, women empowerment, entrepreneurship, and so much more. Enjoy! 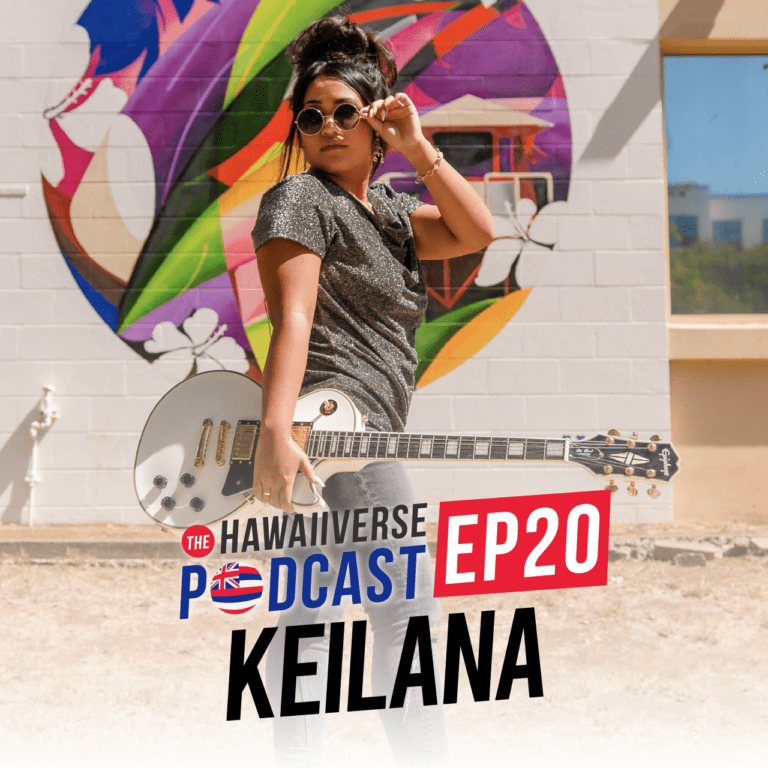 Keilana Mokulehua is an award winning Hawaiian, Filipino R&B/Soul musician from the Island of O’ahu. She is quickly gaining fame and worldwide recognition with her silky smooth vocals and was recently named “Most promising artist” and R&B Album of the year in 2021. Her debut album “I Am” charted at #2 on the iTunes R&B/Soul charts during its first week of release. Some of her works have been featured on platforms such as Netflix MTV/VH1, Disney, and much more. In this episode we talk about her journey into music, her viral TikTok video, mental health, dating, Hawaiian identity, and so much more. Enjoy the episode! 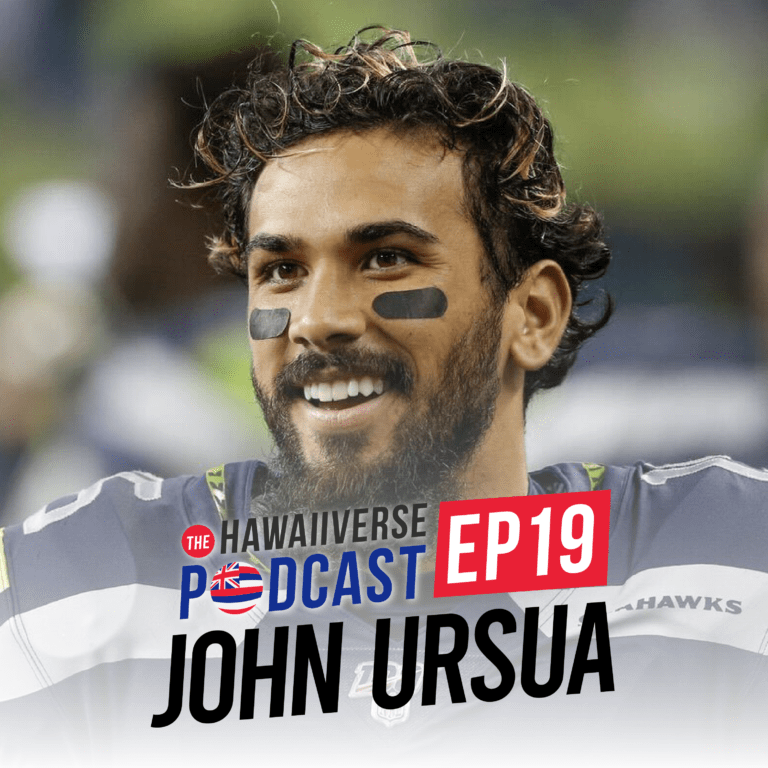 John Ursua is a Native-Hawaiian professional football player for the Seattle Seahawks. He was born and raised in Kailua, Kona on the Big Island of Hawaiʻi, but moved to Utah during his sophomore year of high school. After graduating high school In Utah, and before joining the University of Hawaiʻi Rainbow Warriors football team, he went on a two-year mission for The Church of Jesus Christ of Latter-day Saints in Paris, France. He returned home to Hawaiʻi in 2015 and started his successful collegiate career. In 2018, during his final season at UH, he led the nation in receiving touchdowns (16), was a semifinalist for the Biletnikoff Award, a finalist for the Polynesian Player of the Year, and was named the teamʻs Most Valuable Player. He finished his college career ranked in Hawaiʻiʻs top 10 for career receptions, receiving yards and touchdowns. In this episode we talk about growing up in Kona, moving away from home, his mission abroad, his football career, his faith, and so much more. Enjoy! 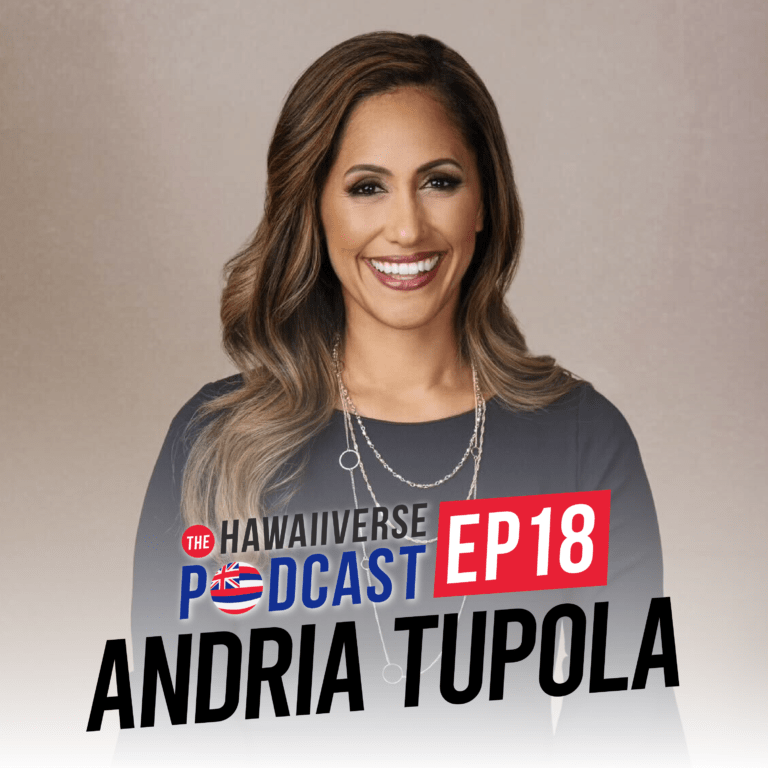 Andria Tupola is a Native-Hawaiian, Samoan, politician from the island of O’ahu. She is a member of the Honolulu City Council, a music teacher, a wife, and a mother to two children. Prior to graduating from BYU-Provo, she attended Kamehameha High School and graduated with honors. She ran for Governor in 2018 and garnered close to 35% of the vote as a first-time candidate, only Native-Hawaiian woman to run for this office, and the youngest Republican for Governor in the United States. To add to her already impressive resume, she also got her PhD in music from the University of Hawaii at Mana in 2020. In this episode we talk about her time living in Venezuela, how she got into politics, the time she ran against governor Ige in 2018, developing critical thinkers, mask wearing, and so much more. Enjoy! 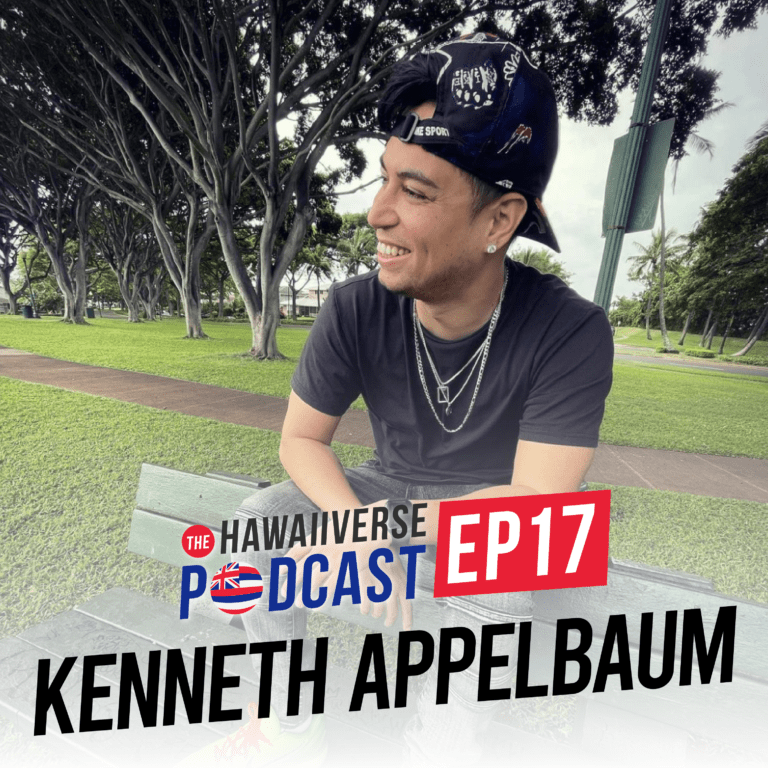 Kenneth Appelbaum, better known as Keneke the Great, is an internet star from the island of O’ahu. He is a Filipino, Italian entertainer, dancer, comedian, actor, and as some of you might know, a great storyteller. With over 36,000 followers on Instagram, he is still finding ways to bring happiness and laughter 15 years after his first viral video. In this episode we talk about how he got his name “Keneke the Great”, the story of his viral video that almost never happened, krumping, his goal in life, cancel culture, his thoughts on the government forcing people to take the vaccine, and so much more. Enjoy!